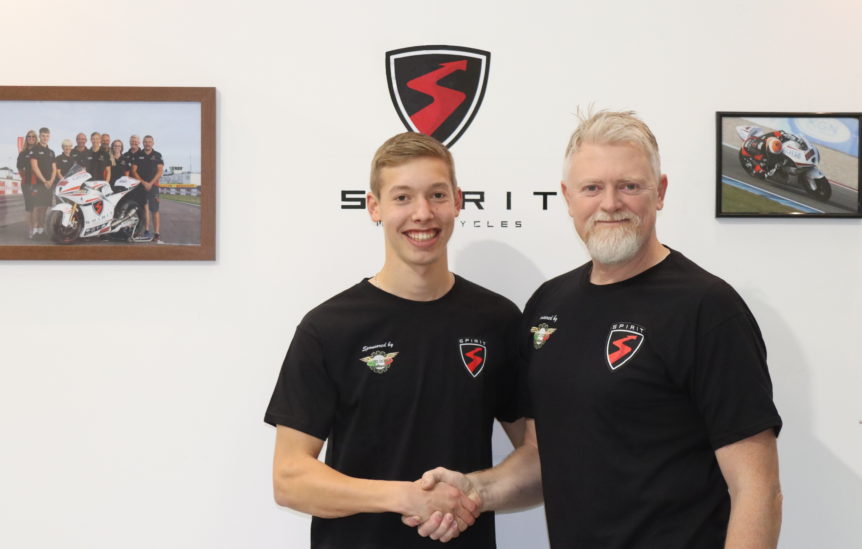 West Sussex-based Thomas Strudwick has secured his place in the 2020 British GP2 Championship with Spirit Motorcycles thanks to a new title sponsor.

Following his successful rookie year in the British GP2 class, in which he secured 8 podiums to finish 5th in the Championship on a former Grand Prix-winning FTR Moto2 machine, Moto Corsa have backed the team, which will run as Spirit Moto Corsa for the 2020 season.

Spirit Motorcycles is a niche British manufacturer that played a key role in the creation of the British GP2 class, with its 2017 GP Corse motorcycle. Development of a new GP2 chassis is already underway and Spirit plan to introduce their newly-developed SP2 motorcycle to the championship, with the intention of supporting additional satellite teams.

“Moto Corsa has specialised in high performance European motorcycles for many years – we stock the biggest selection of MV Agustas in the UK – and have recently taken on KTM street bikes too, so it seemed natural to get behind a race team using British-built machines. We’re tucked away in a quiet town in North Dorset, a great ride-out destination with an award winning café as well and this will be a great way to get us on the map.”

“After a fantastic first year in the GP2 class, I’m ecstatic to be able to continue for the 2020 season! With a great end to 2019, I was keen to put in place plans to stay in the class and I am delighted that Spirit Motorcycles have already begun development of a GP2 motorcycle. It is also fantastic that the team is incredibly focused on achieving their goals, allowing me to completely focus on my racing!”

“Spirit is delighted to be able to release its new SP2 bike and chassis kits for use in the GP2 series in 2020.  Spirit are equally thrilled to have signed Thomas Strudwick for another year following his incredible rookie GP2 season in 2019.  Thomas will no doubt feature very strongly in the championship next year. Spirit are excited by the opportunity to demonstrate what a British motorcycle, British rider and British team can achieve in this very challenging domestic series.”