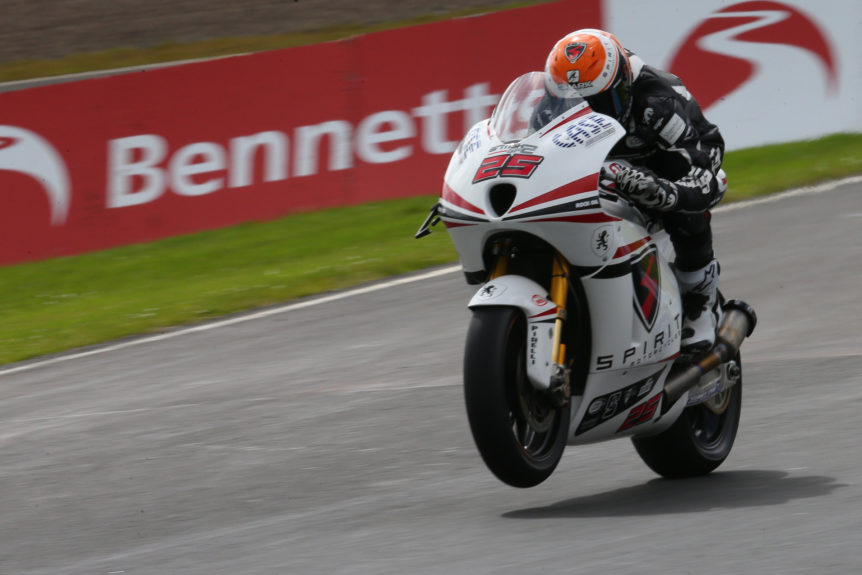 The Knockhill circuit in Scotland is a track that I enjoyed a lot on the Moto3! It’s a short circuit, with many changes of direction and undulations, it’s very physical to race! The weather forecast prior to the weekend suggested that the European heatwave would extend north and we’d have a warm weekend.

Between Brands Hatch, the previous round, a decision was made to change the clutch setup quite dramatically to allow for me to ride it harder with less clutch slip. A slipper clutch, which all of the Moto2 bikes run with, allows the rider to change gear into a corner and the engine speed adjusts alongside the wheel speed. Meaning that the rear wheel does not lock completely when changing gear into a corner. It took me most of Friday practice in the dry to learn the circuit on a much faster bike and also learn the clutch at the same time!

Saturday morning the clouds began to form in the hills behind the circuit and the temperature started to drop. I struggled a bit during the Qualifying session but I started to build my confidence up in the areas of the circuit that I had struggled with on Friday. At the end of the session, I wasn’t happy with my result of 6th in class, however, I had a really good understanding of the next steps to improve for the race.

By the afternoon, thunderstorms and heavy rain fell on the circuit, flooding sections of the track and the first race was delayed. An opportunity to race between two storms was possible but heavy rain continued and race one was pushed into the Sunday schedule. Although the track had dried overnight, 20 minutes before the start of the rescheduled race, the rain fell again! It would be my first race on the larger bike and I was surprised at the amount of grip I could generate from the bike! It took me some time to get used to the conditions but I’m really pleased that I have completed my first wet race!

The day continued and it started to dry, race 2 looked to be dry. I got a great start, moving up to 4th in class on my first lap. I was just behind a podium position for the whole race and was able to stay consistent. I felt I had more pace but I struggled to overtake on the tighter circuit. In the closing laps, I managed to overtake and also set the fastest laps of my race! I have been working on my fitness and it was great to see an improvement in this area of the race!