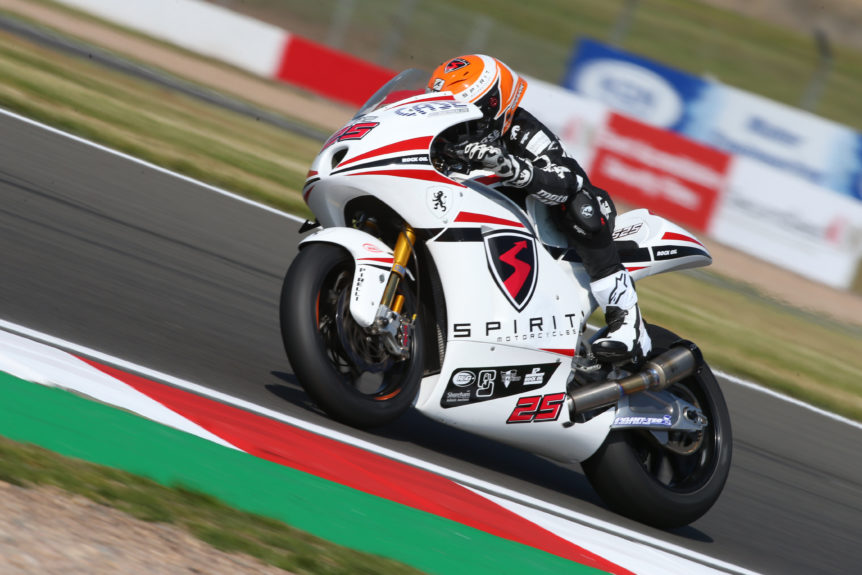 The third round of the season held on the Donington Park National circuit was the second time at a Grand Prix course, albeit hadn’t hosted the GP for many years. After feeling a lot more comfortable on the bike at Oulton Park, I wanted to keep the progress moving forward!

Since the British Superbike championship hadn’t raced on the national circuit for a while, both practice session’s had been extended, which meant that I had longer on the bike to try some new setup changes.

I struggled to be able to turn the bike on power and I didn’t know whether my body position was affecting this, or whether it was a setup issue. I decided, alongside the team, that we should make some changes and see how the bike reacted. I felt stronger in the qualifying session and with a few riders falling, I was able to take advantage and qualify 4th, the best result so far.

Race one looked to be dry, but as we sat on the grid ready to start, a rain cloud started to move across a section of the circuit. Fortunately, it missed the track and the race started. I got a great launch from the line and overtook a few riders in the opening lap. Heading into turn one, a rider from behind went for an overtake, knocked into me and I struggled to then get turned into the corner and was on the gravel. Unfortunately, I dropped the bike and wasn’t able to restart.

Rain clouds threatened the Sunday races and only an hour before the race, a sudden downpour left the track completely wet. However, to add to the difficulty, the track was drying, the sun was out and it was quite windy. I chose to race with the middle tyre, half rain, half dry, but I didn’t expect the track to dry so quickly and nearly from the first lap, the track was dry! I managed to control the tyre, making overtakes and moving up to 3rd place into a podium slot!