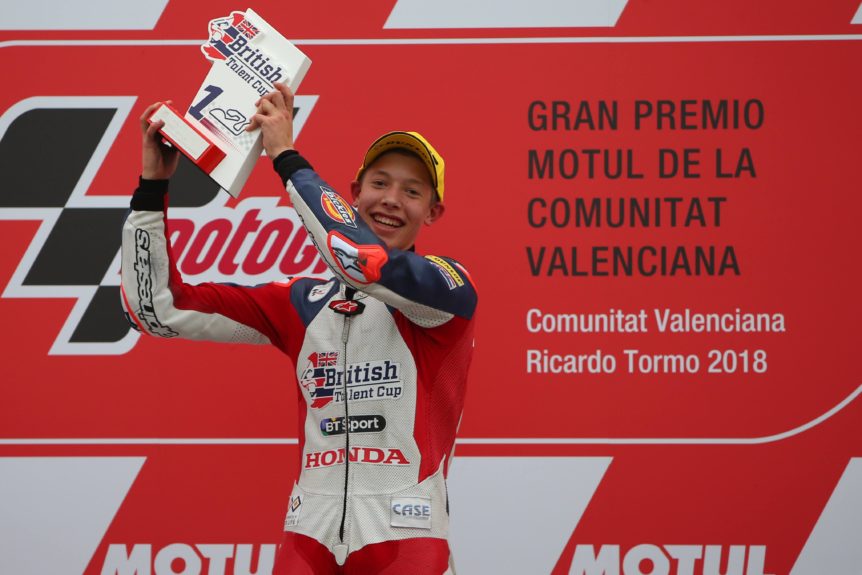 After a highly impressive 2018 season in both the British Talent Cup and the HEL Performance British Motostar standard class championships, with multiple race wins in both series and securing second place in both final standings, Thomas Strudwick, 17, from West Sussex will now step up onto a former Grand Prix winning FTR Moto2TM machine in the GP2 Championship.

British based FTR Moto achieved 5 wins and 6 poles in Moto2TM during their MotoGPTM World Championship project across all 3 GP classes, and now partnering with Horsham based Case Electrical will enable Strudwick to continue his progression on prototype Grand Prix machinery with the GP2 Machine in the British Superbike series.

Thomas Strudwick commented:
“I’ve had some fantastic highlights in three years of Moto3 racing, especially ending last season with the race win at the final round of the British Talent Cup in front of the MotoGPTM paddock at Valencia. Being part of the inaugural British Talent Cup allowed me to make huge progressions as a motorcycle racer, and I am excited to continue that progress into this GP2 project. Our preparation for the change to riding the Moto2 is well underway with developments of my riding style.”

“I’ve been hugely impressed with the results that the FTR has achieved with Grand Prix racing, and also the structure that Steve Bones follows. This is a huge step forward in my career with the opportunity to work with somebody of the calibre of Steve, and I’m so excited for the season ahead!”

FTR Moto founder Steve Bones added:
“I’m really looking forward to seeing my FTR Moto2TM machine back racing in the UK. FTR enjoyed great success in Grand Prix racing, which was remarkable for such a small constructor. We hope the FTR Moto2TM will repeat this success with Thomas Strudwick, this year in GP2.”