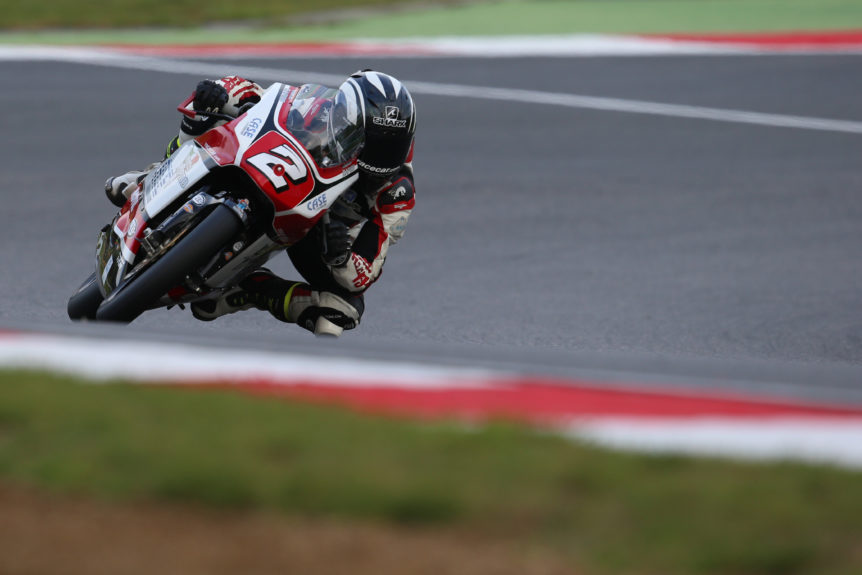 The twelfth and final round of the Hel Performance British Moto3 Standard class championship was held at the iconic Brands Hatch GP circuit; once again joined with the open class for two last races in 2017. With First and Second in the championship already secured heading into the last round, it was all down to Thomas to bring home third in the championship.

After a great opening day of practice, Thomas was situated in second place. With the whole field of Standard riders closing in together, the qualifying session would prove to be pivotal in getting a good grid position for the first race.

An extremely close qualifying session had Thomas leading the class by over a second at the start before frantic final minutes with positions changing all over the place demoted him to 2nd place. Importantly though, Thomas was ahead of 4th in the championship.

After the Championship Winner had a technical problem on the start Thomas was now one of the only standard riders mixing with the top open class group. A great start promoted Thomas in the overall standings, but after getting tangled in the second corner with some riders avoiding a crash ahead he dropped back to second in his class. Thomas managed to take back the lead and won the first race of the weekend, adding to his championship points.

Heading into the final race of the season, Thomas had an 11 point gap to 4th in the championship meaning a finish was crucial. A difficult opening to the race dropped Thomas to 4th and meant he had to work his way back to second in the race. Unfortunately, by this point, the leader had already put a gap to the group and Thomas tried his best to close the gap but got tangled with an open rider and had to settle for 2nd but take 3rd in the championship!