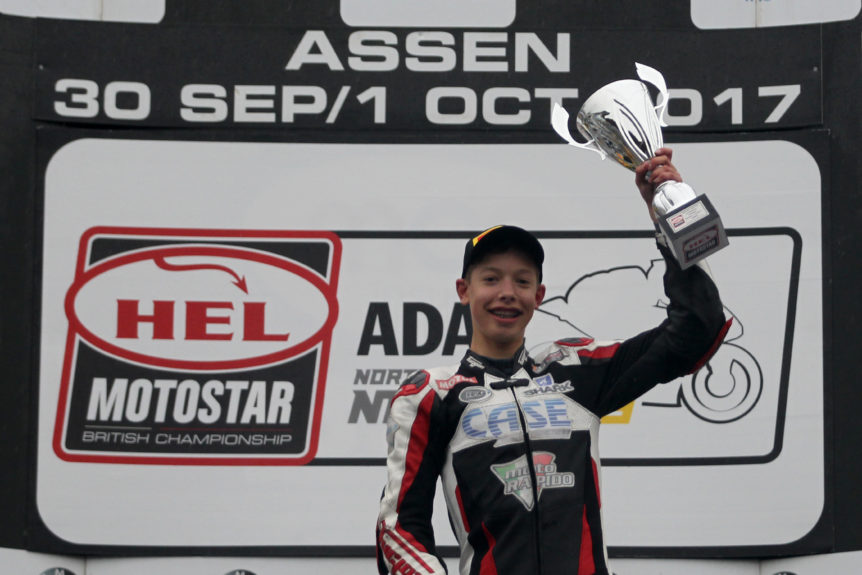 Round eleven of the Hel Performance British Moto3 Standard Class Championship was held on the fast and flowing TT Circuit Assen with a combined race against the Northern European Cup. This was the second time this season where a pure standard class race was held and Thomas was looking to improve on his previous results from Silverstone of a double 3rd place podium finish.

The first day opened with dry and sunny conditions that allowed for clear free practice sessions and a strong performance from Thomas. The main focus for the day was to ensure that Thomas had tracktime as Assen is a circuit that is only used once in the race season.

Day 2 started dry but within 10mins of the Qualifying session starting the rain had started; the weather stayed wet and windy for the rest of the day. Thomas qualified 6th overall and 3rd in the UK class, only 0.024 away from 1st in the UK class. The race was later that day starting at 5.30pm and was declared wet. Thomas made a great start and gained a few places in the first corner, he made a move into the lead of the UK class but some of the European riders had already broken away. Thomas continued to lead the UK class gaining 3 seconds gap on second place by the end of lap one. Thomas was still holding 3rd place overall and 1st place in the UK class entering the final lap and took the chequered flag with a 14 second gap to 2nd in the UK class. The team were ecstatic as this was the second race win for Thomas this year.

Sunday race day saw improved conditions with a dry track for the whole day. The second standard class race took place in the afternoon and Thomas started 8th overall on the grid and 2nd in the UK class. The racing was very close with 9 riders by the end of the race all competing into the last few corners. Thomas realised it was crucial to be in the right place for the last lap and so he made his move going around the outside of several riders to put him into the leading place for the UK class. As the riders entered the final chicane, another UK rider pushed through and knocked into Thomas sending him and another European rider off the track momentarily, resulting in Thomas being pushed back into 3rd place. The Assen meeting ended with two strong podium results and lots of experience from riding with the European class.

Thomas’ thoughts from round eleven:
“The weekend started great in terms of my own goals but honestly I was surprised with the pace on day one. I was really pushing hard in qualifying and luckily got a good spot for the first race. I knew that the European guys would be quick in the wet, going from the practice pace at Silverstone so I focussed on trying to get to them as quickly as possible and try to stay with them. Unfortunately I was a bit late but I had great pace throughout the race to take the class win! Sunday was going to be dry and I knew I had to stick in with the group and learn in the opening laps; I stayed in the mix in the opening stages and soon found myself leading the race which wasn’t in my race strategy at all! After a couple of laps at the front I was soon passed and stuck in with the top 3. I knew I had to be close to the front heading onto the straight so I could slipstream passed, and I was in the perfect position. I thought I’d done enough but just got squeezed out in the final corner and had nowhere to go but into another rider; I finished the race and an amazing end to the weekend. I’m happy with these results.”