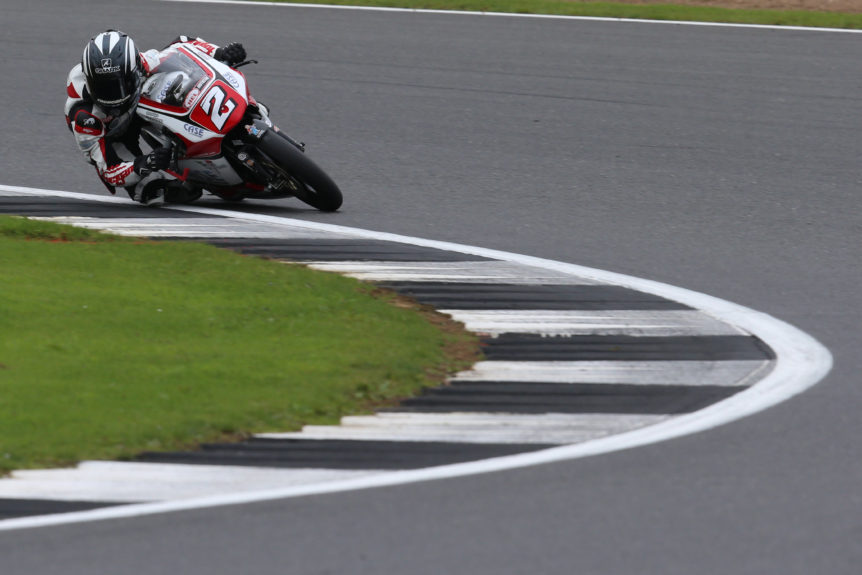 For the ninth round of the Hel Performance British Moto3 Standard Class Championship a combined race with the Northern European Standard class was held on the fast and flowing Silverstone Grand Prix circuit. Only two weeks after the MotoGP weekend and British Talent Cup selection event, it was Thomas’ turn to take to the full circuit for the first time this year.

The first session of the weekend was to be wet and conditions were not idle. Thomas was able to finish the session 5th overall but lead the British class by over 3 seconds! The rain did stop and the track began to dry but once again another rain cloud passed overhead meaning a second wet session would be held. This time Thomas was able to improve his lap by close to 6 seconds and once again lead the British class.

Overnight the rain continued but it looked like the first dry session of the weekend would be Qualifying. Straight from the opening laps Thomas was able to be around the top 3 positions overall. With a clear space and a fast group ahead Thomas went for it and managed to put a brilliant lap in, which would also be a couple of seconds gap to any other rider. He managed to improve on the final laps but so were other riders who were able to get good slipstreams and closed the gap to half a second. The session finished with Thomas taking the Pole Position overall and would start the race from the front.

That afternoon a brief rain shower passed overhead leaving half the track wet and the rest dry. For many of the other races it was a difficult decision for tyres but by the time Thomas race was due to start, there was a dry line appearing and the optimal tyre would be the dry slick. The race started and Thomas lead the opening section of the lap before being passed just before the straight. As the riders headed into the wet Stowe bend, Thomas was able to find confidence and again went back into the lead. A race long battle with many riders would see Thomas in the front group on every lap. Heading into the last lap Thomas was right there, taking the lead into the complex section; he was sat up on the entry to The Loop and was pushed back into the group. A last corner attempt from all the riders kept the positions the same as Thomas crossed the line 3rd in the UK race.

Warm up the next morning was very cold and Thomas finished the session 4th overall, 2nd in the UK battle. The second race of the weekend would be completely dry and meant that finally a full dry race was to be held. This time Thomas was pushed back to the head of row 3 but this didn’t phase him and by the end of lap one was already fighting for the lead. It was a UK one and two pulling away from the rest of the riders and Thomas was in second. He managed to hit the front and began to gap all the riders on his own but after putting in his best laps of the weekend, lap after lap, under the lap record, the chasing riders would catch up and go 1.3 seconds faster than qualifying’s pole lap. After falling down the order a couple of places they headed into the final lap. Thomas was trying to position himself just behind so he could take advantage of the slipstream effect on the fast straights which he did and went into the lead of the race. However, a lunge from another rider pushed him wide and dropped him to the back of the leading group of 15 riders. A huge attempt to push forward meant Thomas would finish the race 3rd in the UK class again.

After finishing race one and two in third position, Thomas has now moved back up to 3rd in the championship.

Thomas’ thoughts from round eight:
“It was a brilliant weekend and I loved racing with the European riders. I learnt a lot in every session and I’m hoping to carry this on into my career. I’m very much looking forward to racing against them again at Assen!”

Iain Hopcroft, Case Moto Rapido Moto3 team manager added:
“The team are so pleased after Thomas’ results at the weekend. From qualifying on pole to battling his way to 3rd in both races; it was exciting to watch and a great race to be a part of. We can’t wait to get back to Oulton Park (this coming weekend) where we know Thomas can reach the top step with his confidence as high as it is.”