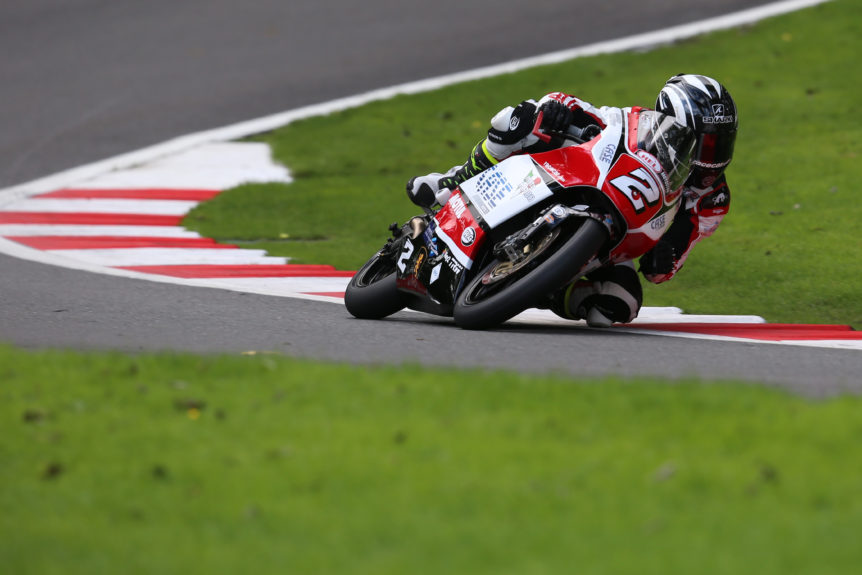 Round eight of the Hel Performance British Moto3 Standard Class Championship was held at the iconic Cadwell Park circuit in Lincolnshire. The weekend was only the second time Thomas was able to ride the track in the dry conditions on a Moto3 Machine; the nature of the circuit is hard for many riders to learn and it was essential for Thomas to use all the practice time available to help in the races.

Friday morning started with a sunny and dry free practice session which was brilliant for Thomas to get back onto the circuit for the first time this season. After working on his lines Thomas was already matching his best times around the track and also ended the session fastest in his class by 0.8 seconds. That afternoon the second session was also dry but this time a lot warmer with the track becoming much faster due to the rubber being placed down in between sessions from other classes. Once again Thomas improved and led the way in the standard class finishing the session this time 1.4 seconds ahead.

Qualifying on Saturday morning was threatened by the changing weather conditions and only just dried out as the session began. It was one of the warmest parts of the weekend but the rain overnight meant the track was now a lot less grippy than free practice. However that didn’t effect Thomas and he was able to lead the session early on. After being caught on the mountain section on a couple of good laps he was lying second in class, but had improved from Friday’s times. It all came down to the final lap but a couple of mistakes whilst pushing hard meant that he crossed the line 0.2 seconds behind pole position having improved his best time of the weekend by over a second again.

That afternoon was the first race of the weekend and Thomas would be starting from the head of row 5 with the combined open and standard class grid. After a good launch the opening few laps were difficult for Thomas and he found himself involved in an open class battle which he wasn’t able to breakaway from. His race pace was much slower than he would’ve liked but the nature of the circuit was proving difficult for Thomas to safely pass without risking a crash. At this point his was running 3rd in his class when a crash at the bottom of the mountain, just in front of Thomas, left him nowhere to go but into the fallen rider. Unfortunately there was no damage to the bike but due to the rule about restarting, Thomas was unable to finish the first race.

The Sunday morning warm up on a cold track was used for Thomas to get comfortable again on the bike and ready to push in the afternoon. Due to the fall in race one and not being able to set a fast lap, Thomas started race two of the weekend from the middle of row 6. Once again a good launch on the start got him straight back with the lead riders in his class; but the long straight after the start meant that most of the open riders were able to pass. Thomas would have to work his way through the pack but once again in the early stages of the race, he was caught with a rider crashing at the chicane. This time Thomas avoided the rider but was nearly 10 seconds behind the lead two riders once he managed to cross the line. With 6 laps to go Thomas was still 3rd in class with 4th place right on his wheel which pushed Thomas on to catch the leaders. He was able to put some of the best laps of the weekend, closing in by a second a lap. On the last lap, 4th place managed to overtake in the mid point of the lap and coming into the final sector where there is only one overtaking spot or a drag to the finish line. Thomas wasn’t close enough for the first overtaking place but tried getting back on gas for the short straight to the line, finishing in fourth place.

After being taken out from race one and finishing in fourth position for the second race, Thomas has now dropped to 4th in the championship with 44 points covering three riders. With 8 races to go, a maximum of 200 points are still up for grabs before the season is over.

Thomas’ thoughts from round eight:
“As always we are quick out the block, which is brilliant as it’s something I’m trying to work on. We still have some things to work on in a race against open class riders, mainly trying to create a gap before we get to a straight. The next round at Silverstone will be a standard class only race and I can’t wait, It’s going to be key to carry on all the positives from Cadwell into Silverstone and make sure everything is ready to win the races”

Iain Hopcroft, Case Moto Rapido Moto3 team manager added:
“Thomas tried his heart out at a circuit he has only raced once before, he was fastest throughout the practices, but unfortunately in qualifying the other guys got a good lap in and gaped him for the first race. It was a tough weekend for the team and we are aware there was a lot of pressure for Thomas with the British Talent Cup the following week. We are so proud of what he has achieved and the effort he puts in every weekend.”