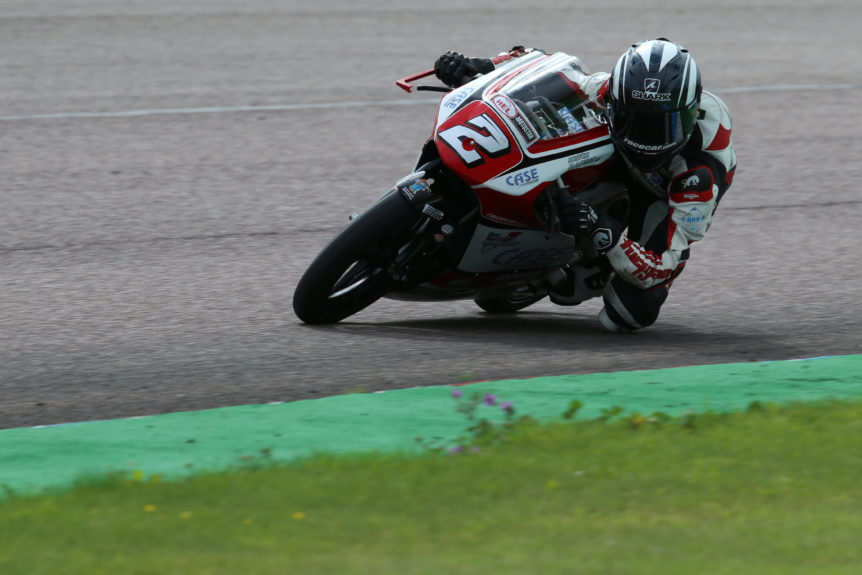 Round seven of the Hel Performance British Moto3 Standard Class Championship was held at the fast 2.4 mile Thruxton circuit in Andover. After first appearing in the 2016 season around this circuit, it was crucial to get good fast laps in straight away to improve Thomas’ confidence and knowledge of the track.

Friday morning opened with a sunny and dry free practice session allowing Thomas to hit the track for the first time this season. After working on some pieces of the track on the Thursday during track walks with the team, he felt confident enough to push from the go and straight away took the lead in his class and even at stages jumping into the top 5 of the overall race against Grand Prix bikes. The second session later that day was also dry but by now the wind had picked up making it much harder for improvements to be made on the fast flowing Thruxton circuit. However, that didn’t faze Thomas as he once again led the way in the standard class and finished the session in 6th place overall, improving his time by nearly a second.

After ending the first day 1.2 seconds ahead of second place in his class the aim was to keep his form running into Qualifying. The wind has dropped ever so slightly from the previous day but the rain was threatening to make it a wet session. The first quarter of the session was dry and it was crucial for Thomas to get a good lap in from the go, even though some riders were trying to get a tow off him. He managed to go 0.1 second faster than the practice times. Overall on the session Thomas finished 9th, which means he would start from the end of row 3 on the grid for race one.

By now the rain had passed and the track was dry for the first race of the weekend; Thomas had a large gap to the group of standard riders behind him on the grid but knew that they would be eager to catch in the opening laps. After a brilliant launch off the line, compared to the bikes around him, he managed to stick with the open bikes through the first corner and made a move on a few riders into the first section of corners putting him into the top group. Keeping this position for most of the lap as soon as the straight approached it was clear that some of the open riders would make a move. Crossing the line on the first lap in 10th place, he began to get into a rhythm riding some of his best laps in of the weekend straight away. Unfortunately during lap 3 while trying to work his way back past an open rider, he was caught offline and crashed out of the race, a huge shame after having a gap of over 3 seconds within the first laps.

A huge effort from the Case Moto Rapido Moto3 team overnight got the bike fixed and ready to race for Sunday and in warm up Thomas slowly built his laps times, allowing for new parts and kit to bed in. Ultimately ending the session second fastest but completing some of the best laps of the weekend.

The second race of the weekend’s grid positions are taken from the lap times within the first race. Due to the fact that Thomas set a brilliant lap time he started from row 4 in 11th place overall but still fastest standard rider. A good launch off the line but slower opening lap meant that he dropped some places and crossed the line in second place. After catching the standard class leader Thomas settled into a good rhythm once again and knew that from the increase in pace from all riders he would be unable to pull away. It all came down to the final couple of laps where he moved through into the lead; and could have stayed there but got caught up with an open class rider and couldn’t get onto the inside line so crossed the line 0.1 seconds behind the winner.

After crashing out from race one and gaining a podium position, Thomas stays 3rd in the championship.

Thomas’ thoughts from round seven:
“This weekend has been brilliant in boosting my confidence on the bike, especially around a track which I didn’t believe I would be so competitive on. I’m really happy with the steps we have made and look forward to carrying that onto the next couple of rounds. Unfortunately the race results didn’t do our weekend justice, but I can’t thank the team enough for getting a competitive bike out there, every session.”

Iain Hopcroft, Case Moto Rapido Moto3 team manager added:
“Thruxton was not kind to Thomas after qualifying so well, he dominated the practice sessions and qualifying finishing P1 so the team’s hopes were high for Thomas to achieve another win. We were gutted for him after crashing out of a 3 second lead but race 2’s result left us feeling great. We now look forward to Cadwell Park in two weeks time.”