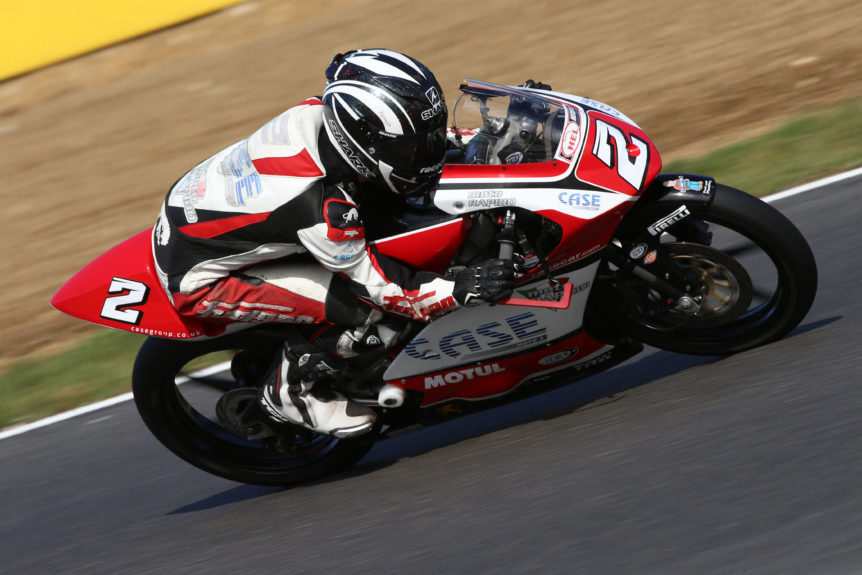 This weekend of the Hel Performance British Moto3 standard class championship will be held on the notoriously fast Thruxton circuit in Andover. The 2.4 mile circuit was constructed on the base of RAF Thruxton which was used in 1942 during World War II; both the perimeter road and runway were used as motorbike race locations from 1968. The average speed around this track on Thomas’ Standard Moto3 per lap is over 100mph.

Thomas’ thoughts heading into round seven:
“We had a few problems at the last round which have been sorted for this weekend. I’m confident that we can win and I’d like to be within the top 10 of the open race also. Although Thruxton is very close to me I haven’t done many laps of the circuit, only last season’s round, so it’s key we get out in the first practice session straight away and get as many laps in as possible.“

Case Moto Rapido Moto3 team manager, Iain Hopcroft added:
“Thruxton is the team’s local round, the pressure is on for a win and Thomas knows he can do it. We have made more improvements to the bike and can’t wait to see Thomas make the most of them.”

Check back on the official Thomas Strudwick social media during the weekend for updates and live timing!