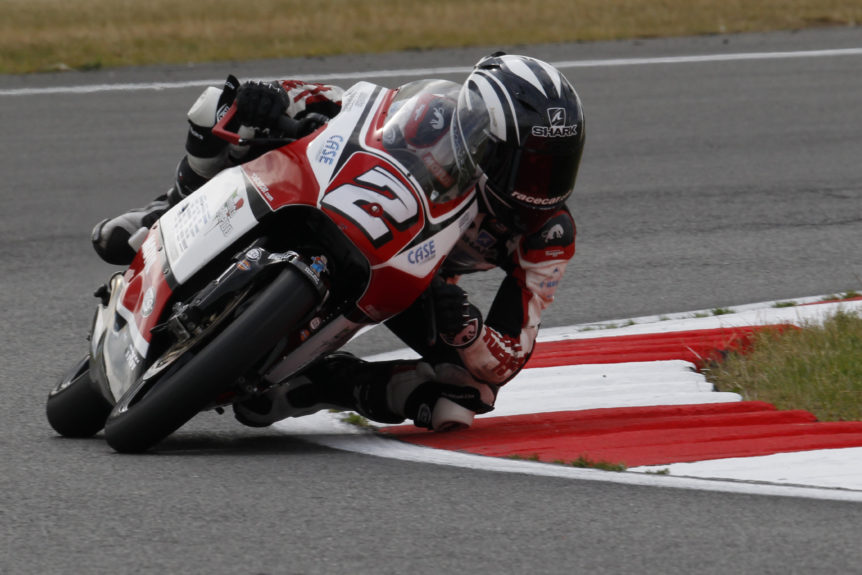 Snetterton circuit in Norfolk played host for round five of the Hel Performance British Motostar class. The circuit has in the past been a great track for Thomas to score points at and is even where he became the Youngest National Race Winner in 2015 on a KTM Cup bike. The team had high hopes for Thomas as he has been building on his strong performance throughout the season.

Friday morning opened with a cloudy but importantly dry practice session allowing Thomas to continue his progress from the Snetterton Official test a few weeks ago. Immediately he was on the pace and by the end of the session had already improved his lap time by over a second and led the way in the standard class by over a second finishing 10th overall out of the 32 riders. With a second session that afternoon a few changes were made to the bike to allow Thomas to continue to work on his performance around the 3-mile circuit. Once again from the off Thomas was in the lead and this time improving his lap time by a further 0.7 of a second; ending the day in first position.

Overnight minor changes were made to the bike allowing for Thomas to re-focus in the morning for Qualifying. Thomas headed out but struggled to get a clean fast lap until 10 minutes to go in the session; after passing through sector one and two already half a second under the pole time an incident occurred at the end of the back straight just as he arrived at it. After avoiding bikes in the circuit and slowing down for the yellow flags the lap was over and the session was stopped so Thomas ended the session in second place.

Race one started with a good launch off the line and entering into turn one Thomas was running in second place. After a collision in the middle of turn 2 which resulted in Thomas having to take avoiding action he dropped back to third place. Slipstreaming down the straight he got the place back and began to line up to move into the lead; another collision took place this time allowing Thomas to take the lead. At the end of lap 2 heading round the fast right penultimate corner of Coram’s his knee slider fell off still with 8 laps to go. He stuck with it and stayed behind 1st place aiming to make a move on the last lap. After realising that he wouldn’t be able to carry the speed through the long right corner on the last lap due to his slider falling off, Thomas made sure he had great drive out the last corner and slipped streamed up the straight side by side with the leader to take his first win on a Moto3 machine.

The next day started with a good warm up in the morning allowing for Thomas to get back into riding and ended the session 2nd fastest. With the race that afternoon the bike was prepared and Thomas was ready to race. Once again a brilliant start off the line this time put him into the lead and he kept it throughout the first lap. After dropping back to third and just losing touch to the lead group during the middle of the race, Thomas managed to close in on the leading bikes for the final laps. The last lap resulted in an extremely close race with any of the top 3 bikes able to win the race, Thomas entered the final chicane and pushed hard slipstreaming to the finish line, a close finish on this occasion resulted in 3rd place but within 0.08 seconds of 2nd place!

After securing his first win in the Moto3 class and gaining another podium position Thomas stays 3rd in the championship but has begun to close in on the lead.

This is what Thomas had to say about round five:
“We’ve had a great race weekend and I’m loving being on the bike. I’ve worked on some things in between race weekends and I feel really confident to push a lot harder on the bike. It feels great to take my first victory in the Moto3 class but of course, we still have a lot to work on in terms of my race, but we are getting there! I feel confident that we can still win this championship and we will take every race as it comes.”

Iain Hopcroft, Case Moto Rapido Moto3 team manager added:
“The team are so happy for Thomas reaching the top step! We know how hard he trains and the time he dedicates to his racing. This gives us greater confidence going into Brands Hatch and has left Thomas hungry for more wins.”