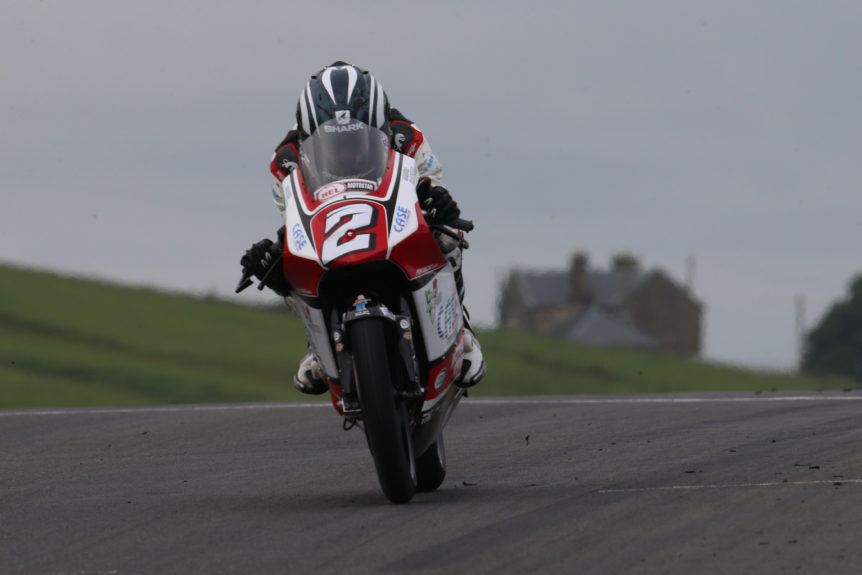 Knockhill in Scotland was the host for the fourth round of the Hel Performance British Motostar class with two races being held on Sunday. After the brilliant , Thomas started this round in 2nd place of the championship with the Case Moto Rapido Moto3 team.

The weekend started on Friday morning cold and windy but importantly dry for the free first practice session allowing Thomas to get onto the track for the first time since 2016. From lap one Thomas hit the front and was beating personal best lap times by the time the session was over; ultimately ending in first position. That afternoon a second free practice session was held but this time with much worse conditions starting with a slightly damp circuit; the decision was made to sit out most of the session until conditions improved. Thomas ended the first day fastest with a large gap to the riders behind.

The next day resulted in a very long wait until qualifying which wasn’t helped by some stoppages from other classes. The British Superbike marshals and officials worked their hardest to get track action back under way allowing for the afternoon sessions to still run that day. During the qualifying session Thomas got onto the circuit and managed to close in on the previous day’s laptime. Some changes overnight didn’t quite work in the way Thomas would have liked but he stuck at it and managed to still qualify in second place.

Sunday was the busiest day of all with warm up early on in the morning, a race shortly after and then a second race that afternoon. Race one started with a great start for Thomas getting away with the front group and leading through a section of the first lap. Heading into the final corner a mistake was made whilst in front and unfortunately Thomas had a small crash. Due to the British Superbike rules he was unable to restart which meant the race was over. The break allowed Thomas to recuperate for the second race as the bike was prepared. Due to the rules in the British Moto3 class, the second race of the weekend grid positions are taken from the lap times from the first and as Thomas was unable to complete a lap he dropped down to the back of the grid. With lots of work to do he got his head down in the race and within the opening laps had caught the back of the lead group. He closed them in but was unable to pass heading into the final laps; managing to finish in a comfortable third position with another podium this season.

Unfortunately due to the incident in race one, Thomas has dropped back to 3rd in the championship but is only 6 points behind second place.

This is what Thomas had to say about round four:
“We had absolutely brilliant pace in the early stages of the weekend, I felt great with the changes we worked on from the Snetterton test. In qualifying I really struggled to get onto the pace with the setup we decided to go for, but we kept at it and managed to get second. The first race obviously didn’t pan out as planned and I was honestly feeling great until the small crash at the hairpin; race two later that day was good to work my way through from the back row to finish third. We are only 4 rounds into the championship and I feel with some planned changes at Snetterton we will be on it.”

Iain Hopcroft, Case Moto Rapido Moto3 team manager added:
“Thomas rode fantastic all weekend and if we hadn’t of had the tip off in race one we would be holding the 1st place trophy, we have some updates for Snetterton and will be chasing the top step for sure…”