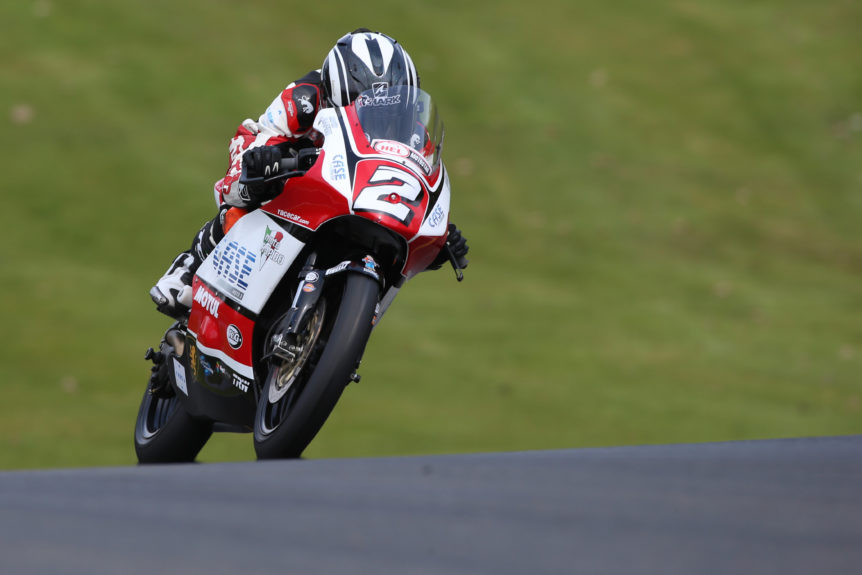 Oulton Park in Cheshire was the host for round three of the Hel Performance British Motostar class with only one race being held on the bank holiday weekend. Thomas and the Case Moto Rapido Moto3 team headed into the round 2nd in the championship looking to progress the bike and gain crucial points for his title challenge.

The weekend started on Saturday morning with a dry and warm free practice session and Thomas was straight on the pace matching previous personal best lap times around the circuit, and ultimately finishing in a comfortable 2nd place. Another session in the afternoon was a chance to try a slightly different bike setup which worked well and Thomas ended the day in first position.

Overnight the weather changed, staying dry but high winds meant the morning session would be an inaccurate representation come Qualifying and Race day so the final free practice was treated as a warm up for the afternoon’s qualifying. During the session, Thomas managed to improve his lap time and went faster than the first day but ended the session in 3rd place knowing exactly what needed to be done heading into Qualifying that afternoon.

Thomas was straight out onto the circuit and was running faster than his previous practice time in second place. A few quick laps at the end of his first run put him straight into first position by nearly half a second! After a small break in the garage he headed back out and completed a few building laps before going for it; the lap was 1.2 seconds faster than his best time and put a huge gap to second and third place. Ultimately ending the session in first place! Overnight changes were made to allow Thomas to continue his fast pace over a full race distance.

The weather changed heading into Monday and rain fell on the Oulton Park circuit during the morning meaning that Warm-Up would be a damp session. With the forecast and weather maps showing for warm weather that afternoon Thomas only completed 2 laps just to make sure the bike was ready to race.

Just as the forecast had predicted the afternoon was the hottest it had been all weekend, drying up the track ready for the race. During the start of the race, a collision on the line between a few riders meant that the race was red flagged. The restarted race got underway and Thomas had a great opening couple of laps but struggled to hold first position in his class as he was working through the open class riders. Once Thomas and the leader got some clear track, they had already gapped the rest of their class by close to 10 seconds but Thomas still had a second to close on first position. Thomas matched the pace at the front but struggled to catch heading into the final laps and crossed the line with his fourth podium of the season and another solid second place finish.

Heading into the 6 week TT break Thomas is still situated second in the championship; 38 points behind first, and a gap of 18 points to third place.

This is what Thomas had to say about round three:

“I’m really happy with this last round as it’s shown that I have the pace to be top of the time sheets. I’m really glad about the work that we have managed to achieve in the first three rounds and I honestly can’t wait to get back out to race in Knockhill. We now have a few weeks of a break but I definitely won’t be sitting still; I have lots of training to do and some more scheduled testing events also..”

“Once again, Thomas showed great pace throughout the weekend and coming away with a podium has been brilliant for his championship. Thomas and the team are making huge steps forward on the Moto3 and can’t wait to get testing in a few weeks time ready to get on that top step at Knockhill”