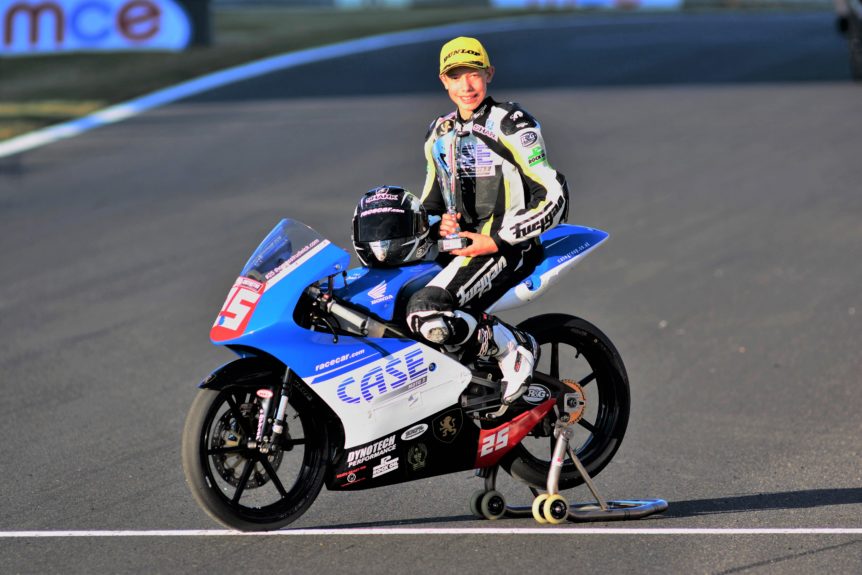 The Brands Hatch GP race weekend started with warm and sunny weather and a dry practice day on Friday.  Thomas had been to this track before, and enjoyed the track, he knew where he could go faster and used this in first practice where he finished 2nd.   The first Qualifying session went well finishing in 4th but Thomas knew that he had more to come; just needed to sort a few problems he had with the bike!

The Saturday morning qualifying was cooler and Thomas matched his previous lap time but a few more minor issues meant that he couldn’t better his time and finished 6th overall.  The weather continued to be hot and sunny and the conditions were perfect for the first race of the meeting.

Thomas had a great start and pushed through the pack in the first few laps, but coming onto the last lap, he didn’t see the Last lap marker and was focused on catching the rider in front not defending his line into the final corner so finished 6th. He was a bit annoyed with this mistake but he knew he would never make it again!  The second race on the Saturday was the re-run race from round 1 Silverstone that had not been run due to poor weather conditions on the day.   Thomas was ready and determined that he was going to be on the podium.  Getting an okay start and working through the class one by one, Thomas put in some amazing laps and made a gap to the riders behind.   He crossed the line with his second podium of the year, finishing in second place and a great result for the team.

Sunday saw another dry track but cool conditions for warm up and overcast, the team had a good session and we were able matched the race pace from the day before.  Thomas spent the Sunday meeting supporters who had come for the day and focussing on his performance from this weekend.  The 14 lap race was not until the afternoon but Thomas was confident he could get back on the podium.  He had a fantastic start passing several bikes into the first few corners and stuck with the open class riders in front of him.  Gapping the rest of the standard bike riders behind him by 8 seconds and ultimately finishing in 3rd place!

The race weekend was a brilliant result for Thomas and we continue to see improvements at every track.  The next meeting will be at Cadwell Park 27 / 29 August. Thomas’ thoughts after round Seven:

“I’m extremely happy with how the weekend went, especially with the two podiums and top 3 finishes. I struggled a bit with setup in qualifying but with the help from Colin and Diane at 100% Suspension we managed to turn it around and get back onto the podium! Thank you to my team Case Moto3 and all my supporters that came to see us over the weekend; R&G, UK Dumptruck Hire Ltd and TS25 Club Members. Thanks also to Colin hill for always taking great pictures of me!”