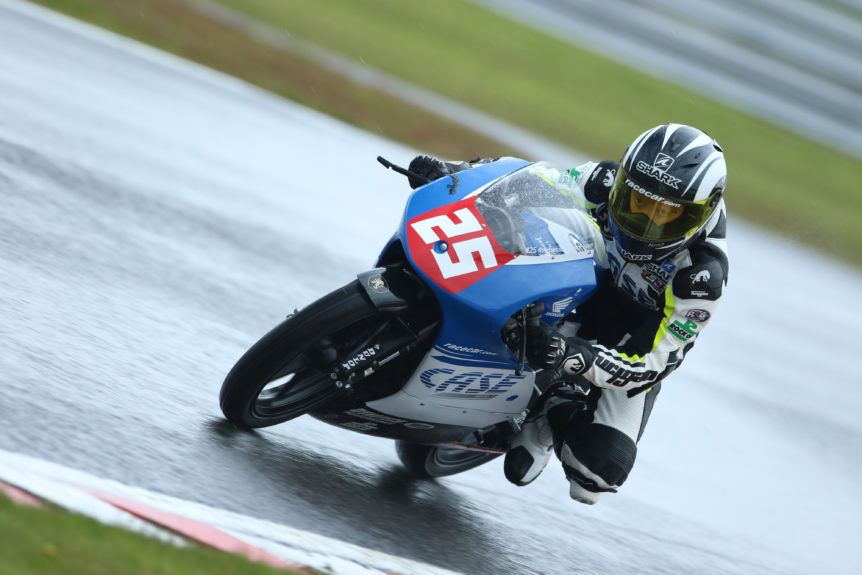 The second round was held at Oulton Park round (30th April – 2nd May) with set-up day experiencing extreme conditions and snow settling on the ground!  At this round the Motostar class came together for the first time for practice, qualifying and race day.

Practice day saw Thomas out on track and steadily improving through the day as the team worked to build a good base level setting for dry conditions.

Qualifying took place on day two with the first session taking place in extremely wet conditions.  Thomas was able to set a consistent pace and led the standard class with his fastest lap from half-way through the session.  Thomas came into the pit-lane to make some changes and re-joined the track to complete two final laps.  The adjustments made the bike perform differently and whilst Thomas was exiting the chicane at Knickerbrook, the bike lost grip and Thomas entered orbit landing some 20 feet away!

The next 3 hours saw the whole team clean down and then repair the bike to enable Thomas to get back out for the second qualifying session.  Unfortunately, after two laps Thomas was black flagged by the marshals due to oil smoke seen coming from the bike.  As the second qualifying session was dry, the lap times improved and Thomas ended up nearly last on the grid in 32ndplace.

Race day started with mixed weather conditions and a cold wind. Thomas realised he would have a hard task to improve on his start position as the track was drying slowly.  The race started with Thomas putting in a strong start and passing several bikes by the end of lap one.  Although putting in a strong performance throughout the race Thomas was unable to make much progress and finished 7th in the standard class.

The next round will be at Brands Hatch on the 20th to 22nd May.Thomas’ thoughts after round two:

“I’m happy with how the weekend has gone. The weekend started well for us especially during the wet sessions where I had a really strong setup and confidence in the bike. At the end of Q1 I was fastest but wanted to try some changes in the bike; it worked well on the first half of the track so I pushed a bit harder, I was on a faster lap when I felt the rear sliding and it let go. My team Case Moto3 did a brilliant job of getting the bike fixed and I headed out for Qualifying 2 ready to set a faster lap time, unfortunately I was black flagged and couldn’t get back to the pit lane during the session. This meant that I ended the session in 32nd with a lot to do in the race. My first few laps where really good and I felt confident passing other riders, mid race I pushed a bit too hard making a few mistakes but ended the race in 7th. I’m now 4th in the championship and ready to try my hardest at Brands Hatch in a few weeks time.”