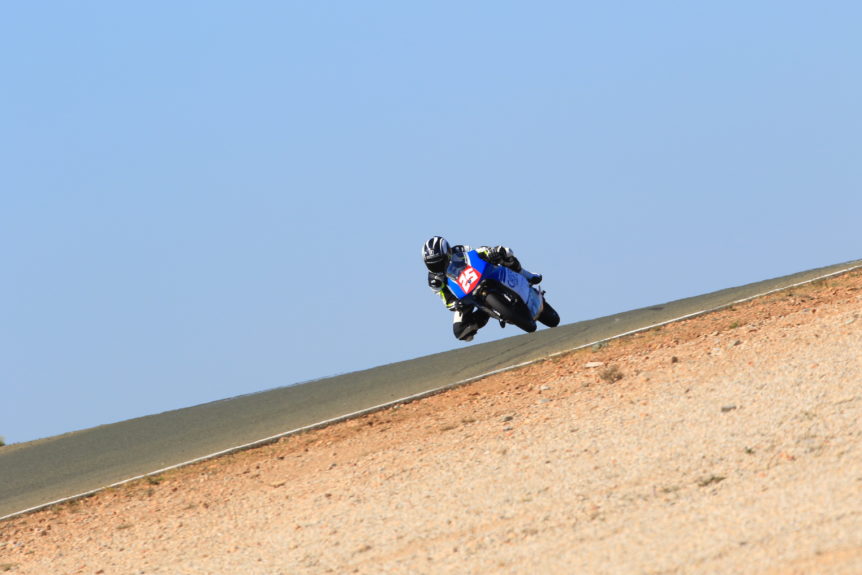 Thomas is soon to start his 2016 championship campaign.  During the off- season Thomas has worked hard to regain full fitness after missing a large part of last year through injury.  He was able to focus on improving his aerobic fitness and strength using weights and bands whilst waiting for an operation in January to have the plates in his arm removed.

The hard work paid off as he was signed up by Horsham-based team Case Moto 3 for the 2016 season.  Thomas will be competing in the Motostar Honda Moto3 Standard Class which runs at the British Superbike meetings held throughout the UK and Holland.

Pre-season testing in Almeria was sponsored by Racecar New Media Services which allowed Thomas to have 4 days at the Spanish track with warm, dry weather.  Thomas’ aim was to get back onto a bike after a long winter break and the team worked hard on running in the bike whilst enjoying the comfort of the sunshine!

The next test day at Brands Hatch was aimed to get Thomas adjusted with the cold weather.  Thomas was able to get more track time and start working on setup.  The official test day at Donington Park on the 31st March was the first time that the Moto 3 Class came together to ride.  Thomas improved over the day whilst continuing to work on his set-up for 2016 season. The team were extremely pleased with test information from the day and feel confident at the start of the championship year.

The first round will be at Silverstone on the 8th/9th/10th of April.  Thomas and the team are looking forward to getting started for the 2016 season. Thomas’ thoughts ahead of round one: