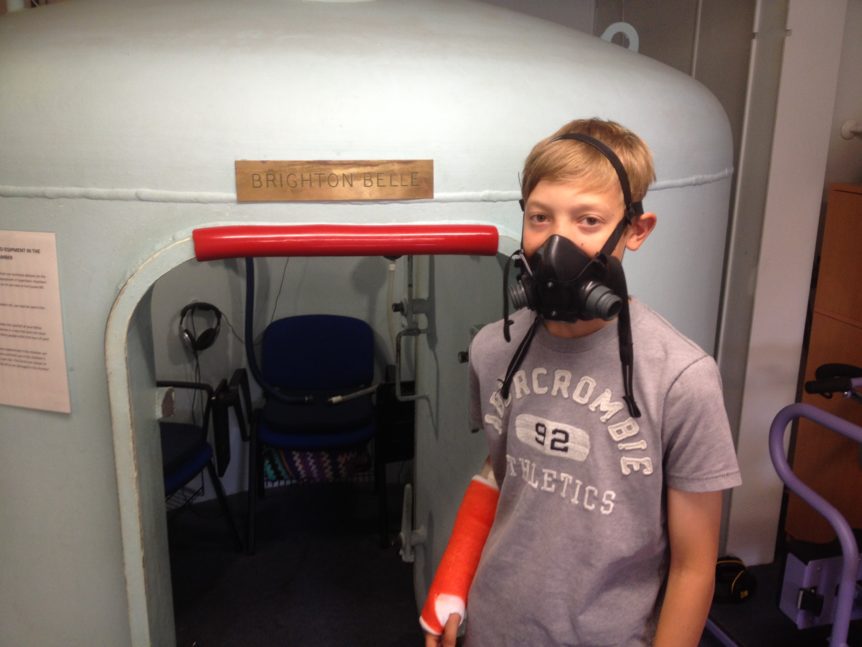 A PROMISING young motorcyclist who broke his arm and wrist while racing around Brands Hatch is undergoing Hyperbaric Oxygen Therapy to speed up his recovery.

Thomas Strudwick, 13, from Littlehampton, came off his bike in excess of 100mph in race two of the Morawaki 250 Junior Cup at the Kent circuit.

Today he is undergoing his fifth and final session of treatment in the Hyperbaric Oxygen Chamber at The Sussex Multiple Sclerosis Treatment Centre, in Southwick.The teen said:

“It’s really sped up my recovery time so I can get back on my bike a lot faster. I’m itching to get back.”

Treatment in the chamber can speed up recovery time by up to 70 per cent.

Once in the chamber, the level of oxygen in the body is raised by up to 1,000 per cent.

Thomas breathes oxygen through a mask, while the pressure on the inside of the chamber is adjusted to the equivalent of 16ft or 24ft under water. He spends 55 minutes in the chamber in total.

The more the pressure is increased, the more oxygen the body is able to absorb.

Extra oxygen taken into the body assists in areas where healing is slowed down by infection or where blood supply is limited by tissue damage.

The weekend of the accident was Thomas’s first time on the 250cc bike and on the full 2.4 mile course. It was also his debut on the international scene after he entered the junior cup as a wild card.

He familiarised himself with the bike through practice and qualifying and started the first race from fifth on the grid.

A four-way fight for the lead resulted in Thomas scooping an impressive second place.

He lined up for race two on the front of the grid and was involved in a three-way tussle for the lead, before the trio came off their bikes on lap eight.